Welcome to another review on the Workshop! Today I’m taking a look at the portable light box Foldio2, released recently through a Kickstarter campaign by orangemonkie. You may remember that I have reviewed the first model as well – this version has quite a few improvements and changes based on the feedback received for the previous model, so check out what I think about this product after the jump.

I took my photos to show an unboxing and review so let’s get right to the core.

Two packages – one for the box and backdrops, the other for the electrical equipment. 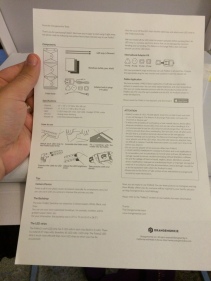 This time the box comes with a full set of instructions on how to set it up and some pointers about the LEDs.

A little carry bag for the adapters.

A set of what I can only designate as spare stickers for magnets.

Foldio2 in its felt bag.

A set of thin paper/felt backdrops in green, black, white and grey. 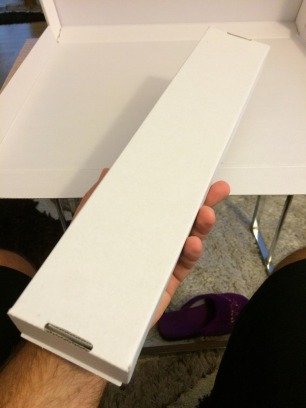 On to the electrical stuff…

Full set of adapters for global travel, 2 LED strips and the connector to the outlet.

The LEDs are stick-on type and they have a dimmer on them! 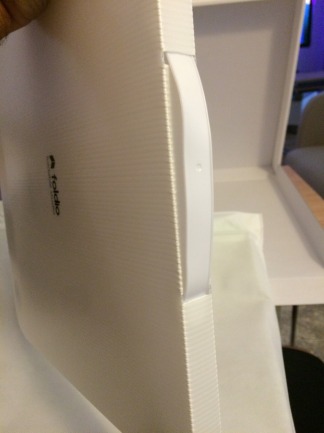 Now comes with its own carry strap!

The carry case for the lightbox and the backdrops also has a carrying hole.

An Apple-esque disclaimer shows that the IP is from this year.

Straight off the packaging you immediately realize how massive this box is. It appears a lot of the feedback to orangemonkie came from people who are in the miniatures hobby who demanded a larger box for larger minis. In terms of volume the Foldio2 is more than triple the size of the original Foldio, with all sides increasing in length from 10″ to 15″. This is quite a difference. Next in line is the material of the box – this time the box is made of semi-transparent plastic similar to elementary school arts bags we used to have which can only work in favor of lighting. And another great addition is the carry handle on one of the smaller surfaces.

However not everything in this first impression is positive. Upon opening the sides of the cube to assemble I was greeted with this little problem:

An odd hole on the middle left flap…

Well it appears the magnet proved stronger than the bonding with the sticker!

Carefully sliding it off…

… and reattaching the missing part. Good as new.

While it’s a minor nuisance it’s still a point to be aware of – this probably explains the extra stickers that come in the package. The magnets are very strong indeed and it may be prudent to be careful when disassembling the box for future use.

Moving on. Next up I wanted to prop up the box to see if everything works in order.

Setting up the box is the same as before – attach top and bottom flaps then support with the middle.

These two ribbed areas are where the LED strips go to. 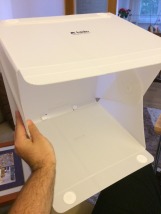 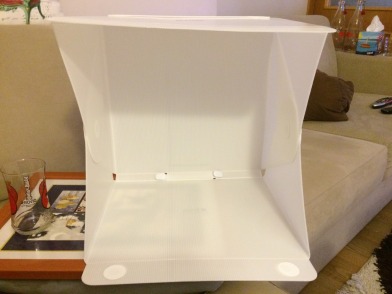 Like Foldio, Foldio 2 has a problem with inward bending sides.

The backdrops are attached with a magnetic strip.

Truth be told I’d have appreciated its mention in the manual. 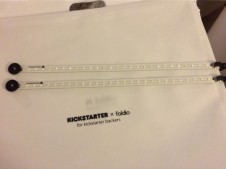 We got a pulse! 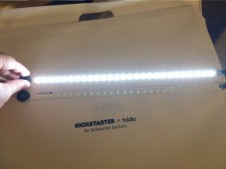 The dimmer allows changing the intensity of light.

Up to lightsaber luminosity even! Might have overexposed minis with this setting so watch out.

After a little testing of the electrical equipment I assembled the box fully to see how it works on the bench and it seems that the problem with the first Foldio persists – the sides buckle inwards either from the force of the magnets or simple because they’re not sturdy enough to pull back the other flaps to form a perfect cube. Not a huge problem but again, it’s different from what is advertised in the Kickstarter page. Perhaps this can be avoided by opening the middle flap way out to create some material memory but you still have to disassemble and fold back in so that’s out the window. Oh well. Another issue was the magnetic strip that holds your props. It is cleverly hidden on the top flap on the other side of where the backdrops are held – it would have been easier to locate if it was mentioned in the manual.

The LEDs are pretty much the showstopper here as they come with dimmers which would help a lot with photographers who want to control the lighting. They’re powered through an outlet this time – the first Foldio used 9V batteries that stuck on the magnets for each LED strip it came with. This cuts down on mobility as you can’t set the box absolutely everywhere but since you’ll be indoors most of the time this shouldn’t be an issue. Besides, outlets don’t run out of juice!

Now that the box is ready, let’s try out the backdrops and take some minis for test shots.

The available backdrops are in grey… 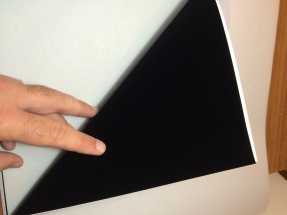 Started out with the black one. 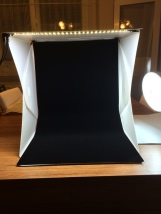 Lit up, it absorbs the light from the LEDs – a vast difference to the original Foldio.

The magnetic strip is a great idea to attach the backdrop. 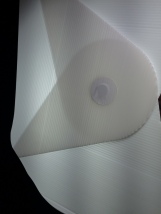 As guessed the lights from the sides work nicely to illuminate the subject inside the box.

Yay! the Heldrake fits this time!

Tried out some preliminary shots with the iPhone and works pretty nicely. As said, the two strips on maximum level overexpose the mini. 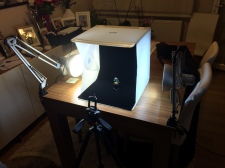 Later on tried some shots with the recently finished Lychguard.

The backdrops are very different from what Foldio offered. They seems to be a combination of crafts paper and dyed felt surface, which allows for very flexible fabric to work with. The original colors in Foldio could be considered as grey, off-white and very dark grey and this time the colors are pretty much what you would expect from white and black backdrops. The white one seems to be completely made of crafting paper which is troubling as the first time I assembled it with the box I got lots of creases in the background. If you want to work with white, consider setting up your own. The grey and the black work beautifully. Did not try the green but like the white one I reckon it will show creases the way it’s packaged in the box. This instead of curling it around the light box I recommend keeping your backdrops rolled inward in a separate carrying solution.

Here’s a few shots of the Lychguard with the black and white background: 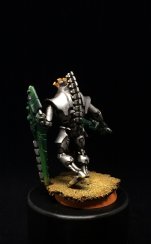 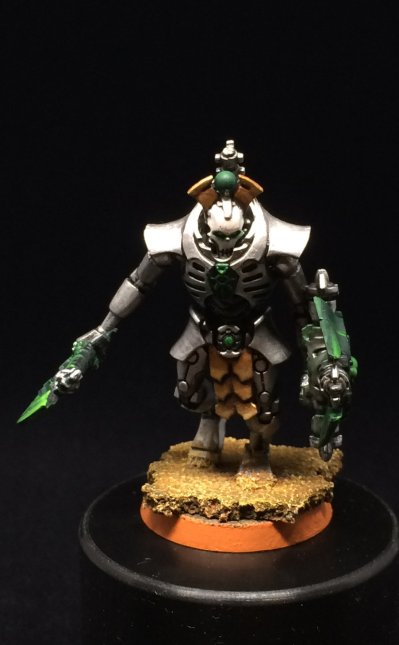 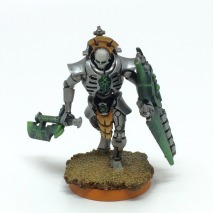 As can be seen I’m still struggling how to shoot in black and white backgrounds but I’m learning. The light box is great at illuminating the mini and if you can set up your camera correctly you can get quality photos with it. Update! The app is finally out as of August 4th. It seems to have all the functions you would expect of a specialized camera app like changing focus and white balance as well as changing the warmth of the light by sliding your finger, so I need to delve a little deeper and talk about the functions.

That said, here’s my tally of pros and cons for Foldio2 (including improvements over the original Foldio):

At the Kickstarter price this product is a solid buy and a vast improvement over the original Foldio but the current pricing is still a little too high for the quality you receive. There are similar products on the market and I would very much like to hear from you if you’ve used them. I have to say I don’t foresee droves of people jumping on the bandwagon to buy Foldio2. After all, this is still a box with inbuilt lighting mechanics and you can always build one yourself with modular lighting. Aside from the slight problems I’ve mentioned above, this is a solid one-time solution you can definitely consider.

Here’s the link for the pre-order site for Foldio2.

Hope you enjoyed the review and let me know what you think in the comments.

Urgent undertakings and hordes of hobby

The adventures of a seriously casual tabletop gamer.

Travelling around the world and painting miniatures

A Galaxy In Flames

IRON SLEET
The Hammer of Wrath

one man's adventures in 40k

A 40K blog about my journey back into the 40K universe

a blog about gaming, painting and modelling.

Confessions of a 40k addict

We all travel the road into the hobby, may as well go with a bear

Adventures of an historical wargamer in the wilds of Arkansas

Miniature painting and gaming from under the stairs

My life story, Gaming, Cooking and dealing with Bi-polar and Schizophrenia

But time you enjoy wasting, is not wasted time...

A regular blog that updates every Tuesday. I'm usually writing about my favourite game Malifaux, but will also occasionally diverge into other games, films, and random musings.

I play for fun... all else I take seriously

Ramblings from The Trenches

The ramblings of a 40-something wargamer who really should know better by now.

A blog about KrautScientist's wargaming exploits

Between the Bolter and Me

Painting, modelling, and gaming for all of our favourite hobbies

Fires Of The Forge